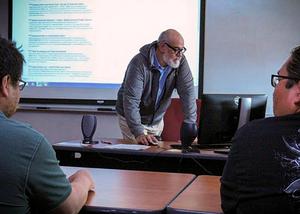 “I am so humbled and excited to be representing not only the Southwestern Indian Polytechnic Institute and the people of the United States, but the Comanche Nation, as well, to the people of Pakistan,” said Harrington in a press release statement.

“My hope is that this experience will give me, SIPI students, and the students and people of Pakistan a better understanding of each other’s culture in the hopes of building a stronger relationship between the two countries and our indigenous populations.”

U.S. Senator J. William Fulbright introduced a bill in 1945 that called for the use of surplus war property to fund the exchange of students in the fields of education, culture and science to promote international good will according to the Fulbright website.

U.S. President Harry S. Truman signed the bill into law in 1946 enacting Congress to create and supervise the Fulbright Program.

“This is a remarkable opportunity to be able to study, teach and conduct research internationally,” said Tony L. Dearman, Bureau of Indian Education Director in a press release statement.

“This highly-competitive program and selection of Mr. Harrington speaks to the depth and breadth of SIPI’s staff, and their passion to reach out beyond the classroom and make a difference on a global scale.”

The program awards approximately 1,900 grants annually, operates in more than 140 countries and is the largest U.S. exchange program offered to students and professionals.

“We are looking forward to [Harrington’s] return to the SIPI campus, when he will bring back to us a deeper and richer understanding of the people of Pakistan while helping us to build a stronger relationship with the J. William Fulbright U.S. Scholar Program to access other resources for SIPI,” said Dr. Sherry Allison, SIPI President.